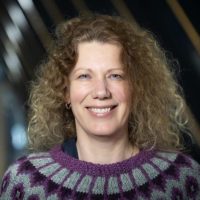 Gabrielle’s full name is Gabrielle Jarvik Stockmann (born Heldrup), and she was born the 31st of May, 1969 in Copenhagen, Denmark. She grew up in Denmark and Greenland, but spent a lot of time in Sweden and the Netherlands as well due to family living there. Gabrielle’s family has always been very international and lived in many parts of the world. Gabrielle has been living in six different countries so far; Denmark, Greenland, Sweden, Iceland, France and the US. As you might notice, there is a preference for the cold regions and mountainous areas!

Gabrielle has a BSc degree in Chemistry and a MSc degree in Geology from the University of Copenhagen, and a joint PhD degree in Geochemistry from University of Iceland and Université Paul Sabatier, France. She worked four years as postdoc/researcher at Stockholm University on projects related to water geochemistry monitoring in connection with earthquakes in Iceland, and on natural CO2 sequestration by basaltic rocks in Iceland and ikaite in Greenland. As of January 2018, she holds a position as Assistant Professor in Geochemistry at the University of Iceland. Gabrielle worked eight years on public science information and administration at different higher education institutions before returning to a research career. A lot of people associate her with Siberian Husky sled dogs as she owned a Siberian Husky kennel for 22 years and did a lot of sled dog competitions. The kennel name was Kennel Jarvik and was closed in 2005.

Gabrielle with her 10-dog team in Jämtland, 2001 (photo taken by Lars Teken Christensen), with Karen and Nina from Camp Dannevall, 2018 and onboard Danish Navy vessel F359 VÆDDEREN, in Reykjavík 2018 (photo: JACO).

Erik, who’s full name is Carl Erik Olof Sturkell, was born the 22th of June, 1962 in Danderyd, Sweden. He completed his Master’s and Doctoral degree in Geology from Stockholm University. In 2007 he furthermore became a Docent in Geology from Stockholm University. Over the years, he has moved from geology to geophysics and now holds a position as Professor in Applied Geophysics at the University of Gothenburg, Sweden. Erik lived and worked for more than ten years in Iceland.  His employments include the Nordic Volcanological Center (NordVulk) and the Meteorological Institute (Veðurstofa Íslands). Erik’s main research areas are crustal deformation processes around the Icelandic volcanoes, Hekla, Askja, Krafla, among others, and investigation of the meteorite crater, Lockne in Mid Sweden 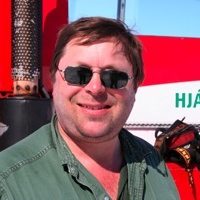 Our household include dogs of the breed Smooth Collie (“short-haired Lassie”):

Yuki, our first Smooth Collie, sadly passed away in March 2013 due to liver cancer. Her full name was Kangasvuokon Shimmer of Spring. Yuki was born 9th of March, 2004 in Finland. She came from sled dog friends, Charlotte and Kjeld Baagø to Gabrielle in 2006, and went with Gabrielle to Iceland in 2007. Yuki was trained in obedience and did really well! She was furthermore really beautiful and became Denmark’s Smooth Collie of the year in 2005. A truly unique dog with a lot of personality! 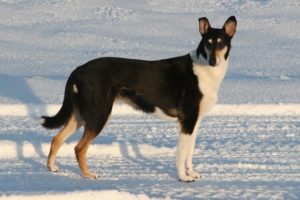 Photo: Erik Sturkell. Yuki in Iceland on a trip to the mountain Keilir, 2008.

Glitnir, our second Smooth Collie, is the daughter of Yuki and born 11th of March, 2009. She was bred by Sinna Kornum in Denmark, Kennel Collected Memories and her registered name is Aimé. Glitnir is a very special dog and can be quite reserved to strangers, but she loves us and is an effective guarding dog. Her ears are wrong (they stand up straight), so she will never make it to the show ring, but that doesn’t matter to us. Someone told us she resembles the Australian dingos, but we actually think she looks more like an Ethiopian Wolf (http://www.awf.org/wildlife-conservation/ethiopian-wolf). 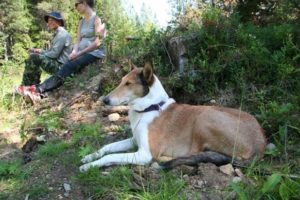 Deli, our cute and energetic youngster, came to us in May 2013. She is from kennel Honey Melon in Finland, where Yuki’s father also came from. Deli’s official name is Honey Melon Fay Fidelia, and she is born January 19, 2013. We truly wondered how tall Deli was going to be. She is by age 2 much taller than Glitnir, but otherwise in all ways a really beautiful dog with a super temperament. 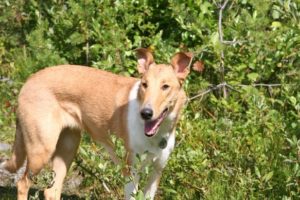