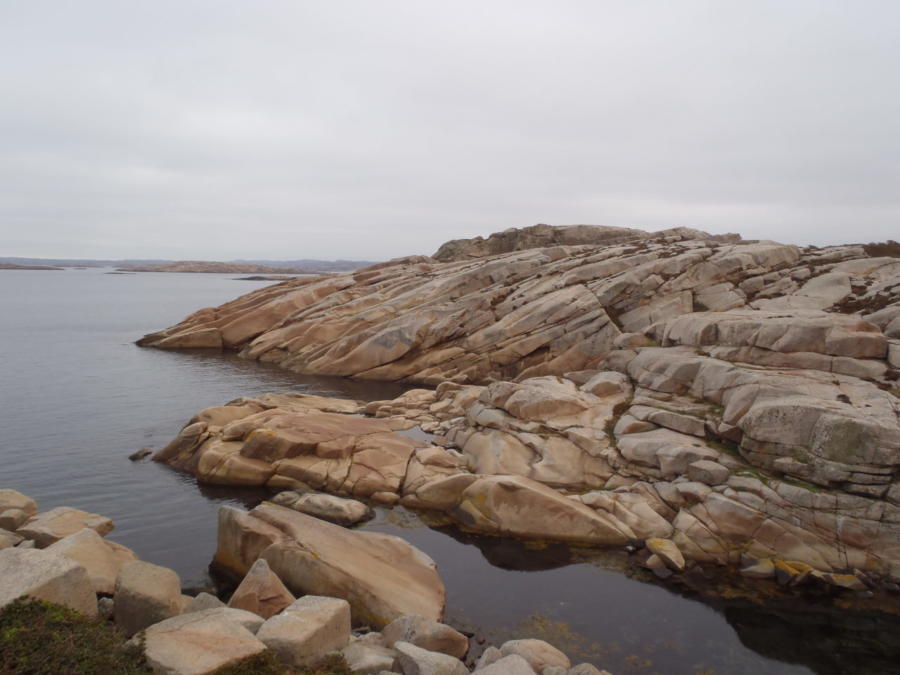 On a beautiful Sunday in September I joined an excursion organized by the small interest organisation called “Granitkusten”. This trip took us to the province of Bohuslän in western Sweden. Thomas Eliasson from SGU was our excursion guide, and the remaining group consisted of Johan, Jesper, Assen, Mats, Kjell-Helge and my self (Fig 1). We met at the parking lot at Grosshamn (Ramsvik) close to Hunnebostrand. The area is situated in the Bohus Granite batholith emplaced 925 million years ago at approximately 10-15 km depth. One conspicuous feature of the granite is the banking seen in it (Fig 2), which is really well exposed along the coast. The granite is intersected by a Permian north-south trending dyke swarm (Fig 3). Most of the dykes are 0.5 – 50 m wide, but over a short strike length a width of 70 meters have been recorded. This is a trachyte-andesite dyke (rhomb porphyry) and its emplacement took place in connection with the failed continental rift that formed the Oslo graben in Norway.

The excursion ended at Hunnebostrand, where we first visited “Hunnebo klyfta” and afterwards the restaurant “Bella Gästis”. The “Hunnebo klyfta” is a gorge that has been formed by deep weathering followed by vertical cracks in the granite and secondly by removing all loose material. This left narrow gorges in the landscape with up to ten meters high walls.