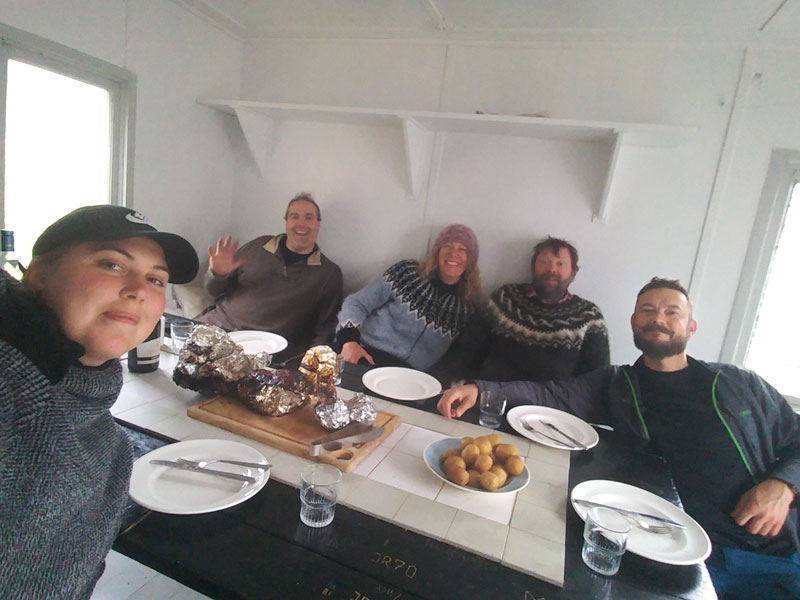 What an adventurous fieldwork we had in Greenland this summer! This year’s research team consisted of Paul Seaman from the UK, Richard Gyllencreutz from Stockholm University, Sigríður María Aðalsteinsdóttir (Sigga) from the University of Iceland, plus Erik and I. We had a lot on our schedule and only one week to carry it out.

Paul and Richard were busy doing marine geophysical mapping of the ikaite columns in Ikka Fjord. We had rented the boat SIKU from Blue Ice Explorer to mount the geophysical equipment on and that worked perfectly. There were major technical problems getting the instruments up and running. If it hadn’t been for the staff at the navy base Grønnedal and their Internet access, we would not have been able to solve this. In many ways, the Joint Arctic Command and the Royal Danish Navy were our saviours this summer! We were able to stay at the navy base Grønnedal, and the military staff there, Jens and Brian helped us in so many ways. SIKU is normally under the command of Laasinguaq Broberg, but as he was going on vacation, he had hand-picked a standin for him, Aputsiaq Egede. Aputsiaq is normally working for the Danish Navy onboard the navy patrol vessel Ejnar Mikkelsen. Finally, navy vessel F360 HVIDBJØRNEN came to help us with the diving in Ikka Fjord. Their diving team helped us take samples of the columns, photograph them and measure the seawater temperature. We got really concerned last year when we saw what the columns looked like through the water surface. This year we wanted to check their ‘health status’ and check how warm the seawater actually was. Unfortunately, way too warm for the ikaite to remain stable. More about this in the future, when we have analysed the minerals in the columns.

I have known and loved the Danish Navy since my childhood in Nuuk and always felt ‘at home’ among the navy people since then. Most likely, I should have joined the Navy if I hadn’t decided to become a geologist :-). I asked commander-in-chief Niels Pind on Hvidbjørnen if he needed a geologist among his crew, but sadly he said no or rather he couldn’t see any obvious use for me except going to exotic geological places in Greenland. The navy divers Morten, EmmE and Max and the rest of the diving team did a marvellous job and managed to do all the sampling, photographing and measuring we had planned over two days. Since ikaite is very sensitive to high temperatures, we had installed a freezer onboard Hvidbjørnen. This guaranteed a safe transport of the columns back to Reykjavík in Iceland.

Besides geophysics and diving, we also had a busy program taking water samples for my own project and rock samples for Sigga’s MSc project. Her task was to take as unaltered rocks as possible from the Grønnedal-Íka igneous complex, describe them in all petrological ways and then use the most unaltered of them in fluid-rock experiments, where she will try to simulate the processes taking place inside the Grønnedal-Íka complex leading to the formation of the ikaite columns.