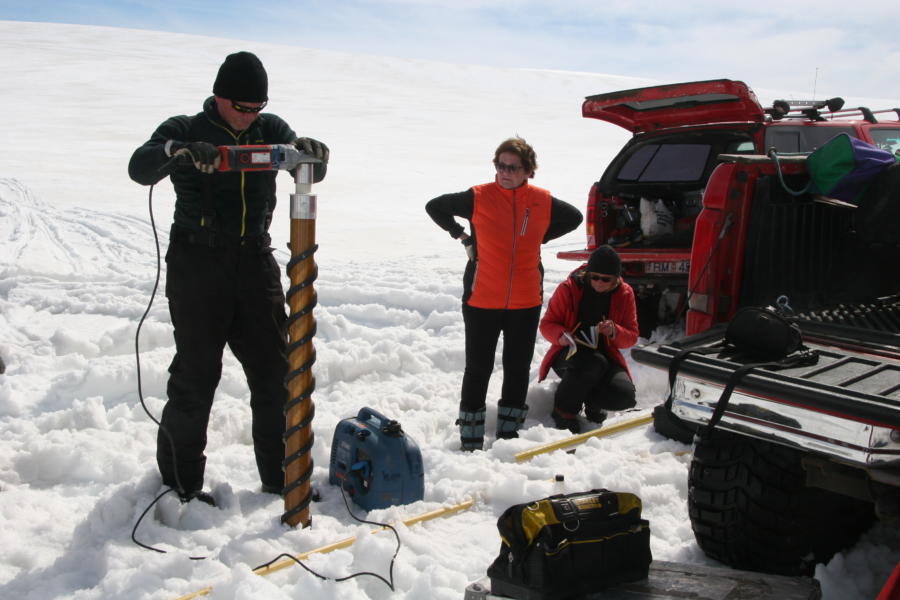 Erik and co-workers just had their work published on the findings of microplast in the Vatnajökull glacier on Iceland. This is Europe’s largest glacier and although diminishing it still receives quite a bunch of snow load each year, which is then slowly turned into glacier ice. Last summer, Icelandic researchers drilled holes into the ice cap and extracted ‘snow’ cores (see picture above and below). Erik went to Reykjavík University to assist in the process of melting the snow, filter the fluids for particles and ship them to Gothenburg. At the University of Gothenburg, Mark Peternell had the particles analysed for microplast and indeed they were there. Thus once again, air is able to transport pollution, particles and now microplast even to the most remote, and once purest, parts of the world. University of Gothenburg sent out this press release about the findings (in Swedish):

Erik always takes part in the annual trips to Vatnajökull arranged by the Glacial Research Society of Iceland (JÖRFI). What they normally do is digging several holes to measure the newly accumulated snow load. In August 2019, JÖRFI made a 100-year jubilee tour in honour of the findings of the Grimsvötn volcano underneath Vatnajökull by the two Swedes, Hakan Wadell and Erik Ygberg. On this trip, Erik arranged for a piece of ice to get transported down to Reykjavík and then later on to Copenhagen and onwards to Gothenburg. This is another ice core project of Mark Peternell. Here the aim is to study deformation in the ice, i.e., in response to ash particles. Bridging to the other project, Mark Peternell wants to study whether the plastic pieces are deforming the ice, too. The real drama was the transport to Denmark. It was not only the ice we had shipped, but also rare mineral column pieces from Greenland – all of them needed freezing conditions. They were all reported missing upon arrival in Copenhagen! My mother and I were waiting for four hours at the airport hoping for them to relocate all of this precious goods, but without luck. It wasn’t until the following day, they finally found it – in the wrong terminal. We just hoped they had kept everything cooled down and luckily it seemed like no major damage had happened to the ice nor the column pieces. More ice results to come!