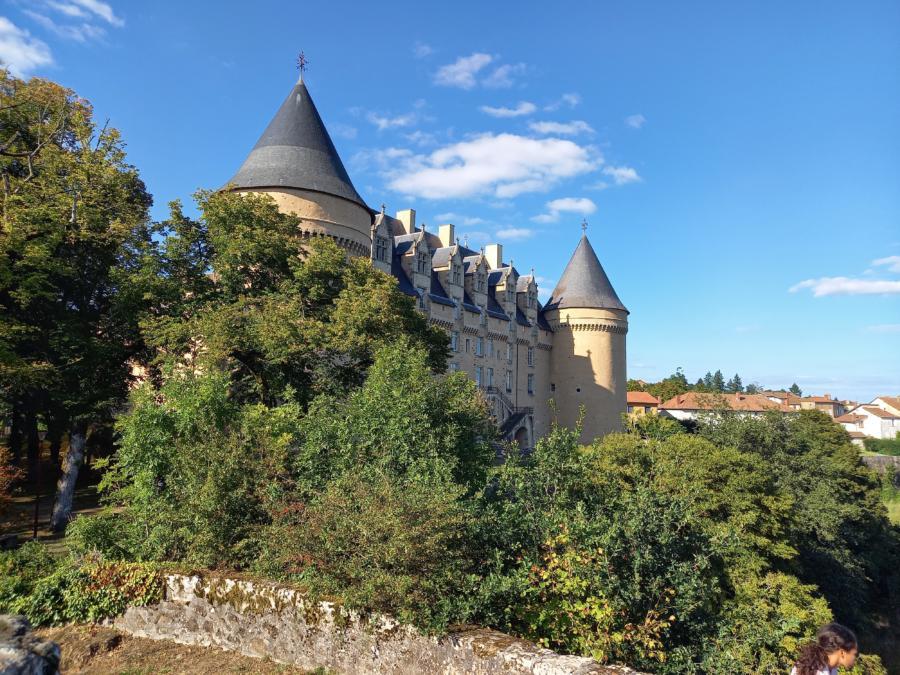 The grand master of the French Rochechouart impact structure, Philippe had invited Jens and I to a CIRIR workshop (Center for International Research & Restitution on Impacts and on Rochechouart) in the town of Rochechouart on the 27th to 28th of August 2021. Five persons participated in the workshop: Philippe Lambert, Jens Ormö, Sylvie Bourquin, Jean-Baptiste Cherfils and myself. Sylvie Bourquin is a professor in paleoenviroment, paleoclimatology with special focus on Perm–Triassic, and Jean-Baptiste is her PhD student. Jens and I meet at the airport in Bordeaux, and we continued by rental car to Rochechouart 2½ hours away. This was the same procedure as the three previous visits to Rochechouart in 2017, -18 and -19. The difference this time was we stayed in the town of Rochechouart instead of the holiday camp at Plage de la Chassagne (Videix). The facilities are fantastic with a newly renovated house for CIRIR (figure 1). In the evening we had a dinner at Hotel de France. A good restaurant if you are not in a hurry. The next day we listened to presentation from each other and had interesting discussions. This took place in the CIRIR house. In the afternoon we visited the castle and in particular its rock foundation (figure 2), which is made up by impact breccia. At 6PM we were invited to hotel de Ville for a small reception held by the mayor. This lasted for two hours and the next thing on the program was a dinner at the Chateau de la Brousse (figure 3) owned by Philippe’s friend. They offered a fantastic dinner and we returned late to Rochechouart. After a late breakfast we went to the core storage (figure 4) in the next-door house. During our visit in 2019 the renovation work was in full swing. Now the building is well equipped for storage, examination, and preparation of the drill-cores. The only downside with the storage facilities is that the elevator is too small for the drill core boxes. At 10AM a tv-team came to film and interview us. Philippe was the star, and he showed the facilities and explained all about the impact. The rocks in the cores are not weathered and you can see plentiful of textures. These can not easily be seen in natural outcrops. After interviewing Philippe, Sylvie, and Jens we all went outside to inspect the rocks at the base of the castle. After two hours the tv team was satisfied. They came from the •3 Haute-vienne tv-station and the same evening the 1½ minute story “Des chercheurs internationaux au chevet de la météorite de Rochechouart” was broadcasted. The tv-team almost got it right! We had lunch at a restaurant next to river “La Graine”, the river at the base of the Rochechouart castle. The next event was a public meeting at the museum showing Cassinomagus a roman bath. The thermae have been bullied with impact rocks mainly suevite that have been quarried nearby. The drill core SOC2 which Jens and I have logged was retrieved next to one of these quarries. The open lecture attracted nearly 50 persons and started at 7PM and lasted 1½ hours all in French! The public was very interested and had plentiful of good questions. Jens did a great job to explain what happens at an impact in a marine target. After the presentation and the discussion most at the participants took part in a picnic outside. Patés from a local producer was served and was fantastic. The paté served came in different types and I liked the paté de carne best. In the evening we watched the tv-news about the Rochechouart despite the tv-team got most of the information wrong by all publicity is good!

Thank you, Philippe, for a fantastic workshop!