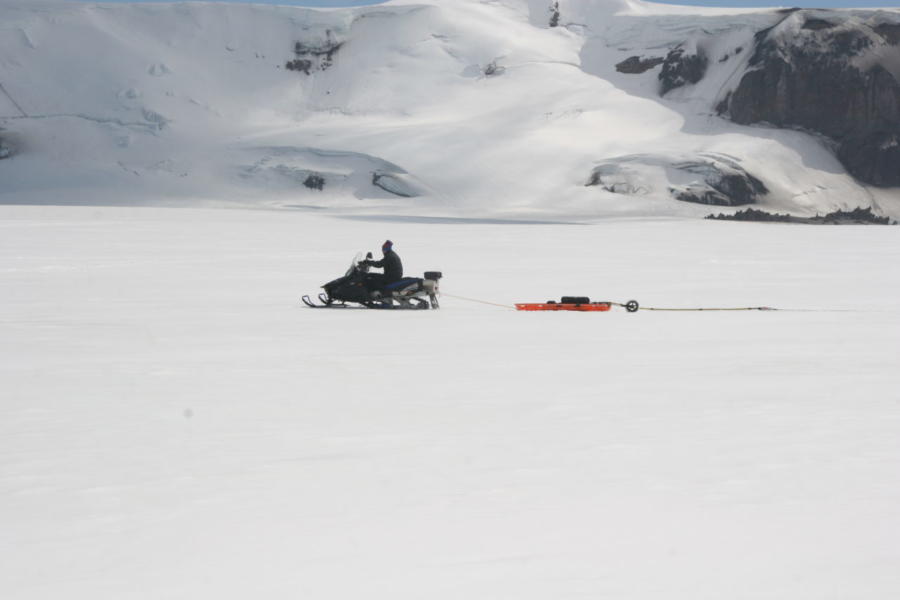 Between the 26th of May and 9th of June, the Glaciological Society of Iceland made its annual spring trip to Vatnajökull. As the interest and research projects are growing in numbers, two succeeding trips were made. Each trip consisted of about 25 persons, with a few brave people staying on the whole the time.

This year was it not possible to approach Grimsfjall from Jökulheimar, because melt water has carried out large amount of fine-grained sediments on the plain before the glacier and made it impassible. The second route up on Vatnajökull, over Skalafellsjökull in the east at Jöklasel, was used on this spring trip.

The weather was just slightly cold, a few degrees below and wind from north–northeast. Down in the Grimsvötn caldera, the wind was much less and the work went well (Fig. 1). The weather situation offered excellent driving conditions and there was no slush (water-saturated snow) anywhere. During this spring trip my program consisted of GPS and Ground Penetrating Radar (GPR) measurements in the caldera. Last year an old benchmark was found on the top of Svíahnjúkur vestri. This one was re-measured, and Benedikt (Benni) Ófeigsson did a great job erecting a new GPS monument at Svíahnjúkur vestri and setting out other GPS instruments (Fig. 2). A GPS instrument was left at this site for the summer. The three GPS instrument that Benni set out at Husbondin (Pállfjöll), Vöttur, and Esjufjöll were retrieved. In the Grimsvötn caldera more than 50 km of GPR profiling was made (Fig. 3).

Fig. 1a and 1b. A drilling down to the 2011 ash layer was performed. The ash layer was encountered at 22 m depth. This is an area upwind from the ash column in 2011. Photos: Erik Sturkell

Thanks to all the people that helped in the measurements. Without your help it could not have been done.