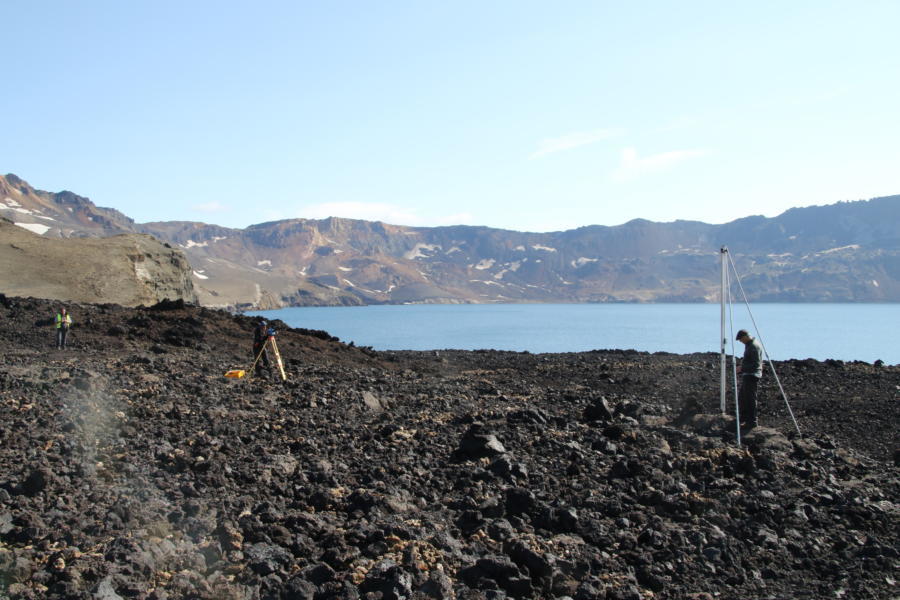 This year I had an enthusiastic volunteer in Jens from Roskilde to assist in the measurement of the crustal deformation of the volcano Askja. In the last week, all the players changed as Sveinbjörn and Chiara could not go north on the scheduled dates of 26–31 July as they re-scheduled their fieldwork in Askja to the beginning of September. Chiara made a fantastic job to round up replacements in Daniel and Erica, a German post-doc and an Italian PhD student, respectively. They took the blue Hi-lux so we had two vehicles for the trip. Daniel had been in Askja a few times and Erica had helped Chiara with GPS measurements in Krafla, but none of the crew had any experience with levelling. Upon arrival in Reykjahlið on Monday evening I held an exercise session in levelling, both practical training and how to do the calculations. The result is calculated directly, and if a problem arises, it can be adjusted promptly. On Tuesday we traveled south toward Dyngjufjöll, deploying one GPS instrument by the road. We talk to the rangers on the way and settled in the hut at the volcano – the hut named Dyngja. The same evening, we deployed the next GPS instrument at the end of the road at Askja (figure 1). Next day the weather was slightly depressing with low clouds. We waited a few hours before we set out to deploy a GPS inside the caldera, the one at Batshraun (next to the Viti explode crater). There is a walking path almost all the way, so the low clouds were not a problem. The rangers have put out sticks along the path and the walk can be made in poor visibility (figure 2). After we was done with the deployment at Batshraun GPS station the clouds started to lift and we took two GPS instruments to be installed in and near the center of the large caldera. The two stations are located 3.5 and 4.3 km, respectively, from the walking path. The weather got better and we could find a good path over the snow. It is a great advantage to walk on snow compared to the lava fields. After the two GPS site was deployed, we started with the levelling of the 1.2 km long profile with 35 benchmarks. The two first benchmarks were covered under snow. This is not uncommon and benchmark 404 is used as reference point. The 404 benchmark is the GPS point and we levelled up to benchmark 405 so the GPS instrument could be erected late on Wednesday. Now all six instruments were out working. The next day we almost completed the leveling except for the last six benchmarks, that was done the next day. The same night, I made all the calculations of the level data and pinpointed two measurements that needed to be remade. On Friday we finalized the long leveling line, and I did all calculations directly after. The result from this year is: The levelling line shows what happens in the shallow magma chamber. This year the 406-benchmark subsided 1.7 mm relative to the benchmark furthest away, number 429 (900 m further out). The figure in the attachment shows the annual change and the cumulative change. This translates to a subsidence directly above the magma chamber of about one centimeter for the last year. In the afternoon we went to the Batshraun station, which is both a GPS point and a benchmark in a short leveling line (Figure 3). We also measured the water level at the lake relative to a GPS point. In the evening we had barbeque at Dreki with the rangers. The weather was good and it was no problem to sit outside. On Saturday, we took down the three GPS instruments in the caldera, cleaned the hut and traveled to Reykjahlið. On the way we got coffee in Herðubreiðalinda and picked up the last GPS instrument. Next day we returned to Reykjavík. Thank you all for a fantastic trip!

Figure 1. The parking at the end of the road at Vikraborgir with the table mountain (tuya) Herðubreið in the background.

Figure 2. The view from the explosion crater Viti (formed 1875) toward the 1961 craters – Vikraborgir. The ejecta (mostly mud) from the Viti explosion overlays the pumice. Further along the path the pumice is overlays by the ash from the 1961 eruption.

Figure 3. Daniel, Erica and Jens at the short levelling line at Batshraun.